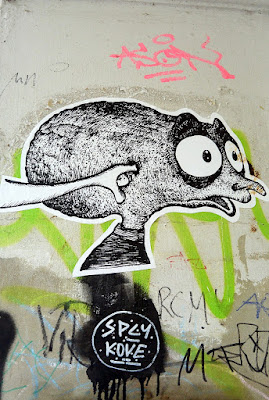 How is it that I can talk to my peers from across Canada and find absolute agreement with 95% of them when it comes to PBLA while those who are in a position to benefit from the government debacle continue to be utterly tone deaf, stubbornly obtuse?

It is beyond frustrating.

I have so many gifts to offer this field. I can illustrate. I can create materials. I can program in HTML and VB. I have designed, built, and implemented databases with idiot-proof GUIs. Of course I fantasize about being approached by a publisher or benefactor who understands what I could create if I had the funding.

Alas and alack! The only folks approaching me with proposals are the ones interested in exploiting the fact that IRCC / MCI and the CLBB THINK that PBLA just needs a little tweaking or a bank of resources (shoddy or not) to salvage it and save its reputation.

My Twitter feed is full of links and articles shared by ELT professionals who care whether their classroom practice is informed by solid theory. I long to live and work among such people.
29 comments:

Striving to Include Aboriginal Perspectives

The seniors voted to study Canada, among two other themes. Never has this class really delved deeply into the topic of Aboriginal perspectives. Yes, at Thanksgiving, I posted THIS VIDEO to give them something to think about and us something to talk more about. But--with their permission--I wanted to try to do more than that.

We started the unit by brainstorming what we THINK we already know about the indigenous peoples of Turtle Island, on which most of us are settlers or descendants of settlers. Could we even say, perhaps, occupiers? The brainstorming session revealed that we think of native people in the past tense. So we talked about that and about the five or six most common stereotypes to come out of Hollywood and mass media.

Since I have a multilevel class and since the previous week's material had been quite challenging for some, I decided that a nice overview and starting point would be Joan Acosta's Best of the Reader - Canada's Aboriginal People.

I've extended the content with the Heritage Minute about Chanie Wenjack and Gord Downie's short film The Secret Path.

Trying to find a suitable film created by an Inuit, First Nations or Metis individual on NFB.ca proved daunting. There are too many for me to preview them all! I chose to show To Wake Up the Nakota Language. We also used Our Home on Native Land interactive territory map.

I think a good final project might be for us to create a poster for the lobby acknowledging that our school is on land that is the traditional territory of the Attawandaron, Anishaabeg, and Haudenosaunee peoples.

As we work our way through this material, I provide opportunities for discussion and for deeper processing of the language we encounter as we read and listen.

You can find more helpful resources, especially for higher levels, on my LINKS page under Indigenous Perspectives / Reconciliation. If you know of other resources that should be listed there, please let me know.

How about you? How do you try to incorporate indigenous perspectives and the topic of reconciliation in your teaching?


#PBLA P.S. Check out the many powerful comments on my penultimate post.
4 comments:

The news this week is that Terry Vanderveen of Abbotsford, BC, has had this article published in TESL Ontario's Contact Magazine. 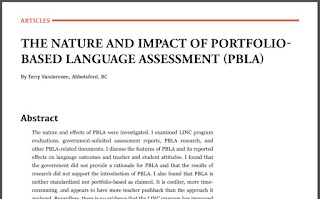 You may wish to send the link to your admin team, MP, MPP and to everyone else who needs to be aware of the mounting case for a moratorium.

Also, if you would like to help me build a list of people and email addresses for such times as these, please leave the names and contact info in the comments of this blog post.
No comments:

My blog only gets comments when I talk about PBLA. So let's talk about that.

A lot of my friends and colleagues in the field made it to the TESL Ontario conference last week. Everyone I spoke to said it was worthwhile. Yuliya Desyatova was given a room that seats about forty (typical for a research presentation), and there was standing room only! My coworker who attended came back very fired up by the findings. She found it very validating to see charts and graphs and quotes from veteran teachers confirming things she already knew to be true.

Another friend said that there was a noticeable change of attitude from the bigwigs. Instructors' critical comments were not always met with that same old brick wall of dismissive or patronizing retorts and platitudes.

On another note, I've decided not to restart the newsletter. It had been on hiatus over the summer along with the blog. There are two reasons I've decided not to continue it. For one, it's redundant. I was not using the newsletter for any purpose other than to recap what was published here weekly. There are plenty of other ways for readers to be reminded of blog posts. The lowest tech, most old-school way to do it is just to mark your calendar. Ha! The second reason I want to let the newsletter go is that I've just agreed to rejoin my local TESL Ontario affiliate chapter in my old role as techie. When I take on something new, I always ask myself how I'll fit it onto my plate. What must I cut out? The newsletter offered no added value. It was simply another one of those things that I did because I'm an experience junkie. I started it just to see if I could do it. Hmmmm. I wonder how many of my life's endeavours fall into that category?

As long as I'm updating you on my continued efforts to maintain work-life balance, I'll say that it's going really well this term. My laptop died over the summer and I've still not replaced it, as I'm saving up for another MacBook. That means that for now all blogging and other computer work is done outside my home. Know what? I'm finding this routine to be in many ways healthier than when I had easy access to my work emails, work server, shared drive with materials and my lesson planning templates in my living room. Now I am forced to compartmentalize and contain. Home is for sewing, cooking, sleeping, playing. This building downtown is for lesson planning, photocopying, and getting things ready for another work week.