Did you receive an invitation recently to answer a survey regarding a national curriculum? I did and cannot remember where I got it! Perhaps it popped up when I logged into Tutela. Or maybe someone sent me the link. Hmmm. 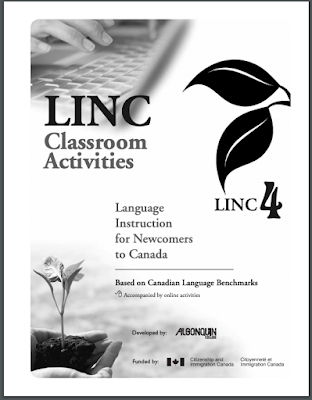 I would love to hear from anyone who has received this, especially if their memory is better than mine. Lol. Unless someone else says they have seen this survey, I am going to start to think I dreamed it.

How do you feel about the creation of a national curriculum?

My feeling, which is what I responded when asked, is that I like resources to be organized according to settlement theme and then by level because that's how I teach. It makes sense to me that if I need a module package on the flu versus the common cold, I would look under HEALTH and would then go to the level appropriate for my learners.

I also responded in an extra comment box that I liked and used the heck out of the LINC 1-4 and 5-7 Classroom Activities with audio files and all of that, but that they are in dire need of updating. I would love to have a fresh, modernized set like that again.

Tomorrow is the fall equinox.
I don't have anything to say this week, so I want to pose a question or conversation prompt.

Would each reader share a favourite classroom activity with other readers?

In my literacy class, I especially like forming small reading circles with one strong reader in each group. I circulate the whole time and am often beckoned to one group or other to clarify the pronunciation of a word. We usually don't attempt such peer-supported reading groups until the class has been reading the same book for two full days. This past week we read Sado Goes to School, a reader from Bow Valley College School of Global Access. I love watching students help each other.

In seniors class, we have a new activity we are trying out for the first time, and it's Show and Tell. Yes, I admitted to them that I stole the idea from my kindergarten teacher, but added that I think it's very transferable to an adult classroom. I started it off by bringing in a sewing project I'd accomplished over the summer: a fanny pack. A student followed suit by passing around photos of the biggest fish he caught over the summer; he reported having pulled a 10-pound channel catfish out of the Detroit River!

I started a new page of our classroom blog called "Show and Tell Gallery." I'll be posting photos there as the students take turns with this new idea.

I just saw in a comment on the TESL Ontario blog that Nwara Abdulhamid is looking for teachers to participate in her research into our experience with PBLA.

I'll add it to the PBLA Activism page of the website (www.kellymorrissey.com).
No comments: 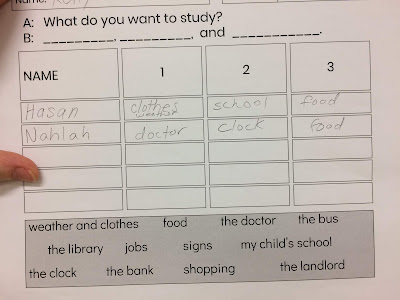 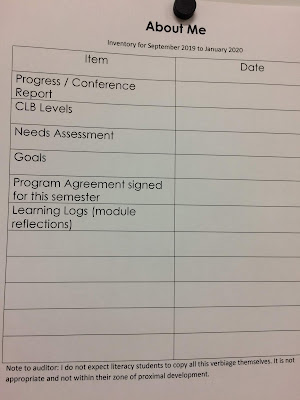 How about you? How was your week?
7 comments:

What's the Standard Where You Work?

I received an email this week from a reader who is doing her best to advocate at her place of employment for reasonable PBLA expectations in the face of plummeting morale. She wanted to know if the submission of weekly module plans or lesson plans was required at my service provider organization (SPO). I answered her and asked if she wanted me to pose the question to you readers of this blog since I have no way of knowing what goes on at other agencies. She said she would like to see such answers, and I'll bet we all would like to know what the majority is doing.

For an example of what is meant by a module plan, see Immigrate Manitoba's samples.

Since we are almost all posting anonymously, I suggest we answer the question after providing some basic minimal (yet still not identifying) info about the employer. For example, you could say which province you're in and/or whether you work for an IRCC-funded program or for a public school board, which would be provincially funded. We could also add whether we are unionized, though I'm not sure that's relevant. I'll start.

I teach at a community agency in a federally funded LINC program in Ontario that is not unionized. At my workplace, teachers spoke up in a unified manner at a team meeting and pointed out that module plans are: tedious, very time-consuming, not of great value to every teacher, and are in fact more of a hindrance to those teachers who like to remain flexible and in tune with student needs through the week. We pointed out that they are NOT one of IRCC's non-negotiables. We stressed the point that in light of how stressful, time-consuming and burdensome PBLA is, our admin should have us do only the bare-bones minimum as required by the funder and NO MORE.

Though it wasn't easy, we eventually won that battle and now do not have to submit module plans. We also do not submit lesson plans in writing at this point in time, though there has been discussion back and forth over the years regarding this. We do, however, submit monthly reports that encompass theme, topics, learning goals for the module(s) as well as objectives for each skill, resources used, methodology, challenges and success stories.