My multilevel class of a dozen or so Chinese and two Iraqis--all over the age of 60--has embarked upon the task of learning how to chat up strangers.

We began the unit by defining small talk and brainstorming together why we do it, when / where we do it, and HOW.

They correctly guessed that we use this superficial blather to break the ice, fill silence (with which we in this culture are not always terribly comfortable), and offer a bit of chatter to pass the time at the bus stop, train station, in line somewhere, in our apartment building or office building elevator, and so on.

We spent a couple of days learning these conversation starters, but in order not to be overwhelmed, decided to select no more than FIVE conversation starters, making sure we had at least one for a party, one that could be used to comment on any sort of weather, and one to use while strolling at the riverfront this summer when we encounter people with pets or babies in strollers. We noted that many of these could be used in multiple situations by substituting the word RAIN for SNOW, and so forth.

The next couple of classes were spent mastering TAG QUESTIONS, since they are so often incorporated in small talk. (Nice day, isn't it?)  Our reference text for this was Azar's blue book.

It wasn't difficult for me to find some nice colour photographs on Google images for us to use as practice prompts. I found a woman walking her Golden Retriever, a well-dressed man standing alone at a cocktail party, a man with a stroller at the park, someone with an umbrella waiting on a train platform, a fellow shovelling the snow from his driveway, a woman waiting for a bus, and a young lady basking in the sun at a park. These I distributed to groups of 3-4 so they could practice starting conversations in each imagined encounter.

Another grammar point I tied into this unit is that of situational ellipsis.

"Do you think Canadians always use full sentences and full questions when engaging in small talk?" The learners let me know that they are completely aware that native speakers often communicate in one- and two-word phrases, but they don't know how to do it themselves.

This was a great time for us to delve into Scott Thornbury's little dialogue called "The Train to Oxford." The students had little trouble adding the punctuation and needed only a bit of help with intonation. (Up for Y/N questions such as "Married?" and down for wh- questions, such as "When?")

They took turns performing this role play for the class, then we spent about 20 minutes of paper and pencil time trying to reconstruct the elided elements. It was fun comparing the various versions of re-built grammar. Some turned "Oxford!" into "Oh, we've arrived at Oxford Station!" while others preferred, "This is the Oxford stop." It's all good.

For their next task, I chose to put together a dialogue between two strangers engaged in small talk at the park using artificially complete sentences and questions. If you would like a copy of this, just visit my website - Free Resources - Grammar and scroll down to Ellipsis (grammar points are arranged alphabetically).  Their job is to strip it down as far as they think possible while remaining natural or NS plausible.

After taking up the worksheet, we went back again to the photo prompts. These seniors really like to take things slowly and revisit the same material in various ways. In order to change things up a bit, this time we moved the tables and chairs out of our way and stood in two rows of seven.  I gave each A a photo prompt. We stood face-to-face, seven As and seven Bs. I explained that Bs had to initiate the conversation with this stranger, and that after about a minute, I would signal Bs to move up the row on person, with the last B coming around to talk to the first A. We did this until each B had visited every A. Tomorrow we'll repeat that, switching roles. Also to add a bit of variety, I threw two new photos into the mix: a woman with a child in a clinic waiting room and an older person with arms full of grocery bags.

I hope you can use these ideas with your group. Let me know if you do. :)
3 comments: 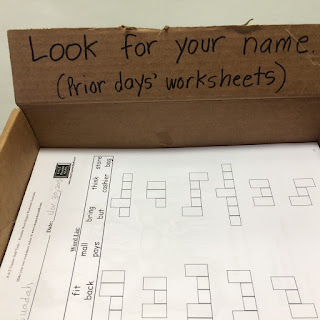 Do you ever find yourself running back to the photocopy machine for one more copy of a handout for that student who is returning after one or more days absent?

During my TESL training in Toronto, I observed how my second practicum mentor kept an 8.5" by 11" cardboard box in one corner of the room. She put extra copies of worksheets in there, and students returning after an absence knew to look in there for any materials they had missed.

I've taken that system one step further. To ensure disorganized students don't inadvertently double dip, I always make the exact number of copies needed for my class and write the names of absentees at the top of their worksheets. The responsibility falls to the student to look in the box before class upon his or her return.

I love how this practice minimizes classroom disruption and allows us to get on with the task at hand: learning English!

How about you? Do you do something similar in your classes?
2 comments:

The Holidays are Coming!

With the holiday season just around the corner, I've started units on shopping and gift giving in both my morning and afternoon classes.

My multi-level seniors have expressed a desire to learn more about Canadian culture, so I thought a lesson about culturally appropriate gifts might interest them, and it did!

I was pleased to find a good resource for our warm-up discussions at ESL Jigsaws. It was easy to segue from that to a virtual shopping trip. To each group of 3-4 students I gave a small stack of holiday flyers and catalogs (Sears, Costco, Williams Food Equipment). I provided them with a graphic organizer on which they could either jot down gift ideas or glue/tape pictures from catalogues. (My Chinese seniors are not very kinesthetic in their learning style; they chose to copy the names of the items.)

For the entire unit plan, my graphic organizer in MS Word, and links, simply go to my website {www.kellymorrissey.com} and then under FREE RESOURCES - Settlement Themes, click the Canadian Culture panel.

As our unit on store returns (see last week's post) has unfolded, I have developed some materials that you can use. It's all Canadian content, using slightly adapted versions of actual returns policies of Canadian stores (Canadian Tire, Zehrs Markets, etc.).

Just go to my website www.kellymorrissey.com and then from the drop-down menu at the top, FREE RESOURCES - SETTLEMENT THEMES.  Click the "Commercial Services" panel and you will see a link to the worksheets and unit outline as a hyperlink under SHOPPING - RETURNS.

Would love to hear if you end up using this with your students.

My class of 15 seniors (over the age of 55) are currently doing a unit on returning something to the store. We like to take things very slowly, doing a LOT of skill-building, visiting and revisiting the same lexis again and again in an engaging variety of activities.

Our first week's worth of lessons were built around LINC 3 Classroom Activities - "Returning Faulty Merchandise." This material provided a great introduction to the needed vocabulary. We took it nice and slow, so we are going into next week just now feeling ready to write our own customer-clerk role plays.

Friday is always a bit different. The students have unanimously voted for an "easy, interesting story" that ties into the topic. The text should be so easy that they can focus entirely on the prosody and pronunciation while reading aloud without being distracted by unknown words (narrowed cognitive burden). So I usually pull something from our school's LINC 1 teacher's cabinet, such as Very Easy True Stories. The lower level students in this multilevel class appreciate having a text closer to their level, and those who read at a level 5 and up are not bored since we are focusing on pronunciation.

This week I wasn't able to find a related true story, so I cut up a picture story for pairs to order, coming up with their own language for the story of a woman who buys a shirt that is too big for her husband and has to exchange it. Picture activities are IDEAL for multilevel classes.

After the break, we adjourn to the computer lab. Here are the listening links I provided this week relating to store returns. I especially love the video on the English in Vancouver blog. 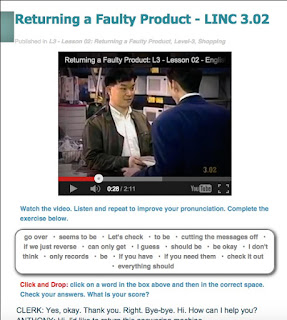 Once we have written some very simple dialogues and acted them out, the next step will be to study some real stores' returns policies. I have already photocopied the returns policy that was included last week in a delivery I received from The Hudson's Bay Company. I distributed that before the weekend--retyping it in a much larger font for compliance with the OADA. The fourteen Chinese students in the class appreciate having a text at least a day ahead of time so that they can go to town with their electronic dictionaries. I like that they do their dictionary work at home, as this frees up class time for speaking and listening practice.

At this point I envision that the culmination of this unit will be a role-play activity in which the class is divided into roles of clerk and customer, as follows:

Mind you, this is going to take A LOT of prep and skill-building as I do the task analysis and break it into its component competencies. We will need to learn many chunks of language, focus on pragmatics and much more to achieve this goal. Right now I'm not even sure if this will take one or more weeks. In my usual habit of letting formative assessment shape the unit as it rolls out, the students and I will work together to determine how far and how to break down the objectives.

I'm looking forward to it!

How about you? Do you have any suggestions for me as I enter week two of our store returns unit?