I love my morning class. This group of about eleven Mandarin speakers and four Arabic speakers--all over the age of 55--is the light of my life.

And they constantly express to me how happy they are with their class, especially since we've overcome the Chinese students' reluctance to participate fully in needs assessments and what I call classroom democracy. No, they are over that. Now they boss me around, which is wonderful. They adore their little English class that I tailor to their expressed needs. 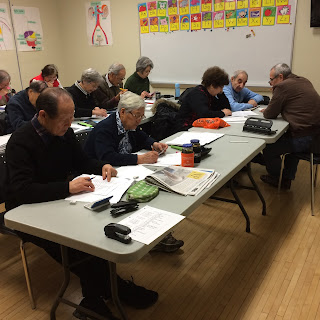 I don't feel I am helping them nearly as much as I could be or should be. Before I get into what isn't working, let me share...

Some things that ARE working:


I'm ashamed to admit that after three years with this group, however, I'm just now starting to wrap my head around what isn't working. My students, with a couple of exceptions, are NOT meeting their stated goal of increased social integration. They are not becoming risk takers. They are not breaking their addiction to the little gadgets. They are not practicing English outside the classroom, nor even at break time. In fact, a recent speaking/listening assessment that came on the tail end of two plus weeks of preparation for it left me crestfallen.

The task seemed simple enough to me. Start a conversation with a stranger. We practiced and practiced. We paired up with each other in every conceivable way in order to get ready for this test. We used photos as cues and role played these scenarios ad nauseum. The test had a few criteria, which we went over ahead of time, pulling up the rubric on the projector board. One of the criteria involved strategic competence.

"I will use a word you don't know," I warned them. "You will be expected to use the strategies we've been learning in order to repair the communication breakdown."

The Arabic speakers had no issue with the task. When they entered the room to be assessed and saw me hit the RECORD button on the iPad then point to the photo of the neighbour shovelling out a driveway buried under a foot of snow, they chatted me up charmingly. When I used the word squalls to see if they could recover from encountering an unknown term, they used effective strategies.

The Mandarin speakers, on the other hand, floundered. The fact that they can ace grammar tests blindfolded with hands tied behind their backs isn't doing them much good if they can't carry on a simple conversation with a smiling stranger at the bus stop, especially in light of their stated GOALS. Sigh.

So! (This is where you, dear reader, come in.) I need a new attack. I'm going to try to find everything I can find on two topics, to start with: teaching strategic competence and teaching English to Chinese students specifically. I've already found one scholarly article online indicating that being raised in a culture steeped in Confucianism can indeed hobble an ESL student in some aspects of their ESL progress. Fascinating stuff.

One thing I may do is give them the Strategic Inventory for Language Learning. This might help raise their awareness of weak areas while showing me where we need to focus more of our energies.

Can you help me out? Can you give me ideas and suggestions and paste into the comments area links to every resource you know of that could help me build a different and more effective curriculum for this special demographic of ESL learners in the new year? I need help!