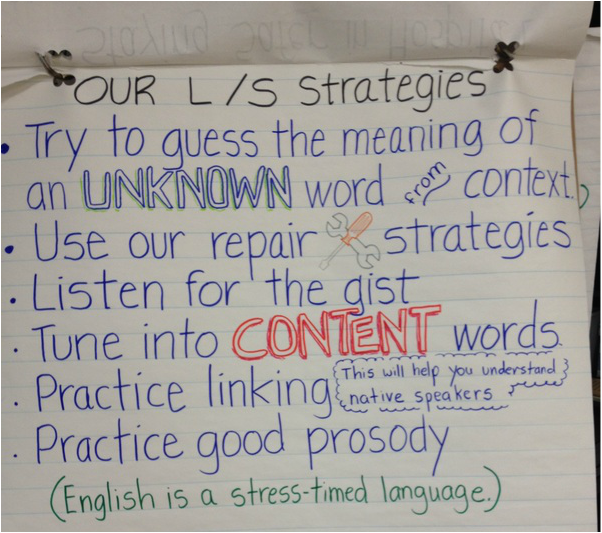 I'm happy to report that the first phase of Listening Boot Camp (the buy-in) has been a success, but not without a bit of head-banging along the way (my head against classroom door--to much laughter). Many grasped the concept of guessing a word from context after I read "The Shillybog" aloud to them while they shouted out possible meanings for the nonsense words. To satisfy their unavoidable demand to see all oral texts in writing, I let them spend an hour with a printed copy, delighting in the fact that dictionaries were of no use whatsoever.

I gave them some language for oral practice:

A: What do you think 'shillybog' means?
B: I think a shillybog is a type of night club.
A: Why?
B: Because we know it's downtown, and we know people go there after work to drink and dance or sing. It could be a dance club or karaoke club.

That worked well. The next day I wanted to give a lesson on the art of talking around an unknown word, so I brought in a package of little dinosaur figures from the evil dollar store. After explaining the point of the exercise and getting agreement that they would not use dictionaries or pencils during this part of the lesson, I put them in A/B pairs and slipped a plastic T-Rex, Pterodactyl, or Stegosaurus into the waiting hands of each A partner, who tucked it under the table and vowed not to show the toy to partner. I reminded the Bs that communication is a two-way street and that they could ask partner questions about the item hidden away between cupped hands.

Soon I was hearing things like, "Does it have a long neck and tail?" "Do children visit parks and see statues of it?" Feeling satisfied with how things were progressing, I slipped out to use the washroom. On my return minutes later, two students had bilingual dictionaries open, and I heard the word "dinosaur."

I will be honest with you. I was crushed. I love my senior students like my own grandparents, so becoming angry with them is almost beyond imagining. But my face flushed. I got their attention and asked them, "Do you know how long I searched for an item nobody would know? By looking up the word, you've ruined the lesson."

You have to realize that I would normally NEVER use such strong language with my students. But this sneakiness and not taking me seriously when I set rules for activities has been going on for well over a year now. They do as they please, thinking a sweet apology makes it all better. Enough is enough.

Since they rarely if ever see me upset, my visible disappointment got their attention. Having used the dinosaurs as a warm-up and practice, after the break we played a game to practice this new skill of talking around an unknown word. I divided the class into two teams and explained the charades-like activity to them. Taking turns, one student from each team would come into the hall with me to peek at an item from a bag I'd brought from home. The student would then return to the classroom and try to describe the item to his/her teammates. Speaking the L1 meant an end to that turn and no point for that team.

This actually went very well. Some items they had to describe included a corkscrew, sink strainer, zip-lock bag and tape measure. Only one student lost the turn for her team by lapsing into her first language.

Thursday was compromise day. As a reward for their great efforts to fully participate in the Listening Boot Camp activities, I let them see the names of all the mystery items from the day before in the form of a matching worksheet. Once they had worked with classmates to complete the gap-fill, I asked them to practice a short customer-clerk dialogue with the same household items in mind:

After pairs had practiced their shopper-clerk dialogues one time through with each item, I invited them to the front of the class to perform for each other.

At the end of class that day, three students came up to me as they were leaving in order to tell me, "We like this method. We like listening boot camp."

Friday's lab activities included links to videos meant to reinforce some of the concepts presented during the week.