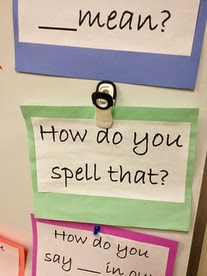 This week was the real test of the students' understanding of and investment in the new ideas around putting aside L1 and electronic (bilingual) dictionaries in order to focus more completely on improving listening and speaking skills.

I felt we had spent enough time building the toolbox, but the question remained: would they use those tools? I felt more determined than ever not to let conversation time turn into the same disastrous scene as always--with me running around trying to police the violators of the NO DICTIONARIES and NO L1 rules.

Here are some things I did to ensure a better outcome:

And? It worked. For the first time since assuming the role as their instructor, I witnessed not one single instance of a student reaching for the bilingual dictionary or speaking his or her first language. That lasted a good half hour. I don't dare hold my breath and think it will necessarily happen a second time without a repeat of almost all these reminders, but at least I know that problems of this type in the past were caused in great part by my failure to prepare the students to succeed.

I welcome ALL respectful comments, suggestions, typo corrections, or reports on what you had for lunch. :)