Before I began implementing Back to the Well in my classroom a few years ago, my usual practice would have been to spend some days scaffolding a pharmacist-patient role play and other days on the use of modal auxiliary verbs using pages from an Azar grammar book.

Now, however, the audio or written text of authentic language becomes the basis of further linguistic exploration. That one text can give us semantic exercises, syntax practice, discourse activities, pronunciation and prosody lessons, as well as being a springboard for presentations, posters, field trips, and invitations to guest speakers.

One of the discourse activities that John and Chirawibha Sivell mention in their article "Sending Them Back to the Well: Slowing Down, Turning Fewer Pages, and Engaging Learners More Deeply" in the Summer 2012 issue of Contact Magazine is parallel writing.

I have had success using this activity with the seniors. During one module on home remedies, we read a chapter in More True Stories by Sandra Heyer about the strange foods that are believed by some to cure ailments and keep us young. 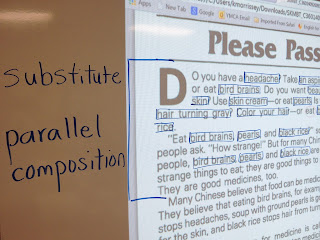 After reading the story and doing the five or six activities that are provided in the book, I asked the students to use the bones of the paragraph to write their own article about a weird health concoction they knew of. Through colour coding with markers while the passage was projected onto the board, I helped them notice which words they would need to replace with western allopathic over-the-counter remedies and which vocabulary they would replace with their own unusual cures.

It took a few runs at it before they completely grasped that they were to re-use the syntax and function words in the same tense as in the original while changing out only the content words, but once they got it, they were thrilled to have a model that made their compositions sound so natural.

The students were very engaged, motivated perhaps by a wish to share with me and their classmates folk remedies that had been passed to them through generations. Their essays were so good that we ended up turning them into presentations for the class. Our pet name for this activity is "hanging new flesh on old bones." It is a fun way to get learners re-using lexical chunks of English at the discourse level.

Update: I was asked to give another example, so...

Last week, as part of our Canada theme and on the topic of Canadian culture and cross-cultural friendships, my multilevel class read this section of Joan Acosta's Best of the Reader Series - Canada: 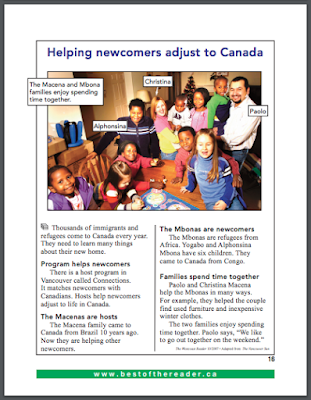 The following took place over a period of twelve classroom hours.

After reading this every way we know how (chorally, individually, writing in the C-V link lines), doing the activities that come with it, and playing this game with it, I asked students to get into groups while I wrote discussion questions on the board to get them thinking about whether we have a similar program in our community. In fact our new Conversation Cafe initiative did come up in conversation. I added a few questions to the board to encourage comparison and contrast of the two programs. 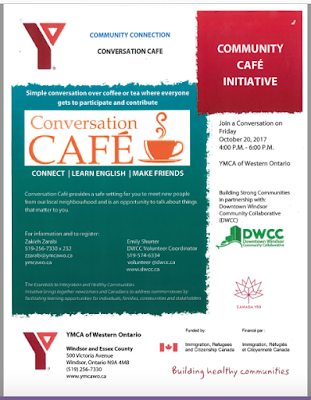 They crowded around the one student who had attended that inaugural meeting to find out the details of her experience. She felt like a rock star, I'm sure.

Next I passed out blank paper and showed them how to make a Venn Diagram. We brainstormed; I elicited from them the ways the two programs differ and are similar. 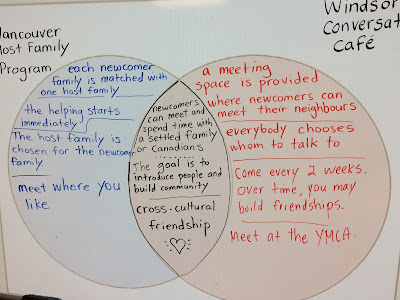 Finally we were ready to write our parallel compositions using the existing format, structure and a lot of the language from Joan Acosta's article. Together we decided which bones to keep and which parts of each paragraph / sentence would need to be replaced with our own ideas about Conversation Cafe.

After students worked on their individual compositions and those were reviewed, we compiled the best ideas from all of them to publish one story to share with the whole school. 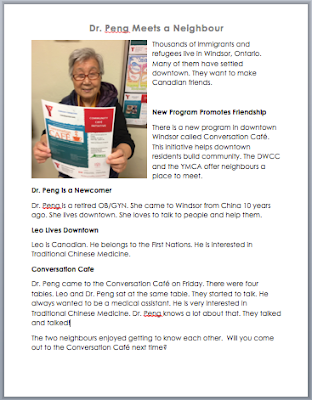 What do you think? Might you give parallel writing a try in your classroom soon?

Email ThisBlogThis!Share to TwitterShare to FacebookShare to Pinterest
Labels: Back to the Well, discourse