First I want to share Yuliya's update on the state of PBLA research. Here is her recent missive.

Here is a very brief update on our PBLA implementation research and a new project invitation for literacy teachers, from a colleague at theUniversity of Birmingham.

I continue to present on the project that you participated in order to stimulate further discussion, more research, and, ultimately, policy changes.
Three major conferences are approaching: Metropolis National Conference in Halifax, BC TEAL, and ACLA/CAAL 2019 in Vancouver. Hoping to see you there if you are close to any of the conference sites.

Good news is that other research projects on PBLA are underway, and both are researching PBLA impact on beginner language learners: Dr. Marylin Abbot is working with learners of refugee background in Edmonton, and Esther Karasova is inviting literacy teachers to share their experiences with PBLA implementation at pre-CLB and lowest CLB levels.

If you could share the invitation below with your colleagues, it would be very much appreciated. Insightful and practice-relevant research can not be conducted without teachers' input. Esther’s survey is short, focused, and can be completed in about 10 minutes.
Thank you for your consideration!

Secondly, I'm happy to announce to literacy and low-level ESL teachers that I've just published a new ESL literacy reader with activity pack. It's aimed at about a high CLB 1L to 2L or a CLB 1 class and is called The Library. You can download the PDFs of the book and activity pack from www.kellymorrissey.com - LITERACY - School and Library OR you can click either the book image or the activity pack image on that site to go directly into the Google file in order to edit it before use. The book itself is not city-specific, but the activity pack does have Windsor street names and our late fines. So the activity pack would need to be edited before use by teachers in other cities. Please email me if you find a typo or have any feedback. 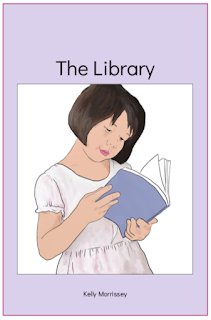 Lastly, I would like to address myself to those commenters whose comments have not made it past the new screening process in the past week or two--not that any of you would be back here to read another blog post! The rule as is stands, having been put to a vote by readers, is that the anonymous commenting feature is intended to be used only by those whose comments could get them fired or blacklisted. If you want to take potshots at the PBLA skeptics and critics, use your name. If you want to call us whiners and wallowers in negativity, do so under your own name. If you want to make the point that the issuing of new PBLA guidelines means we now have no excuse not to all jump back on the bandwagon, shut our traps and just put the damned pieces of paper in the binders, you may say that; just sign your real name.

I think that is where a lot of debate is going to centre now. What do the new guidelines mean for everyone? For some, it could mean an end to a lot of bullying and power grabbing by supervisors who had been using their twisted version of PBLA to make teachers' lives a living hell. That's yet to be seen. But for some of us, the new guidelines do little to change our stance. I don't have Claudie's gift for spelling things out; I'm fond of metaphors and allegories.

My PBLA lead teacher, after a round of inspecting binders in anticipation of a visit by an IRCC binder auditor, said to me: "I don't know why you have such issues with PBLA. You know how to do it. You're doing it fine." She said something to that effect. I responded, "Just because I can follow some steps doesn't mean I think it's in the best interest of stakeholders. You could set up a ladder and ask me to climb to the top and back down 17 times. I could execute that perfectly. It wouldn't mean I agreed with having to do it."

Suddenly a scene from an old movie came to mind.