Today in the meeting for discussion that took place before the Meeting for Worship of my group of Friends just five minutes across the Detroit River, the topic was gifts. How do we find out what gifts each attender or member has and how those gifts can be brought out to the benefit of the Meeting?

I love the question.

Yesterday I was listening to This Jungian Life podcast series, which I only recently discovered. One of the most intriguing episodes for me was the one about the Shadow. The three analysts delved into what Shadow is: the parts of yourself you unconsciously cut off because you cannot bear to face that they are part of you. This is usually a dark side, but Jung also recognized a Golden Shadow, meaning good parts of the psyche that can get severed and lost beyond consciousness. The analysts also made a point of distinguishing between Shadow and something else: undesirable traits and qualities that have been socialized out of us but from which we are not completely cut off and which we are not totally unaware. An example of this might be my bitchy side. I have been socialized to tone it down and hide it, but I'm very aware it exists. The same can be said for positive traits: some get completely cut off (Golden Shadow) and some are just kept in check by societal and cultural rules while still being in one's conscious awareness at least some of the time. 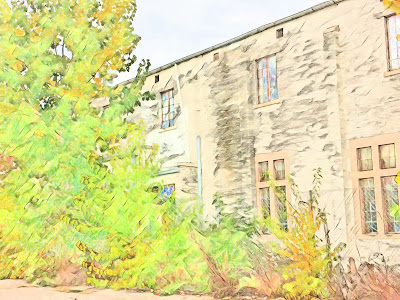 Throughout my life I've sometimes found it tricky to express my gifts in group situations, especially in jobs. Sometimes you find yourself working for someone who isn't as bright or competent as you are. Such a manager might find his or her underlings' gifts to be a threat to his/her ego instead of a help to the team. Even fellow teammates and classmates can contribute to our being socialized to hide our gifts. An example of this that seared itself into my memory in high school was when my test score set the curve for the grading, and other students gave me the stink-eye. When I taught Japanese to grade six students at Gibbs Magnet School in Little Rock, I noticed a very bright girl who was mixed race but who--like almost all racialized children in the South--chose to hang out with other Black kids. When I would call on her, she pretended not to know the answers to questions. I knew she knew the answers. I could see it in her eyes. She was shutting down a part of herself to avoid being teased and perhaps even completely ostracized by her peers in a sub-culture that equates raising your hand and giving the answer with "acting white."

I've done a lot of shutting down of parts of myself over the years.

As I sat in the discussion group this morning participating in the brainstorming part of the meeting and anticipating the break-out into smaller groups for an activity in which we would each be asked which activities bring us joy, I began to daydream and think back to the jobs I've enjoyed most. The thread connecting them all is obvious to me. I've been happiest when my employer gave me the freedom to wear the hats I wanted to wear and contribute my gifts in ways that made me feel fulfilled.

At the public library in Little Rock, I took over the job of making attractive monthly thematic displays. I got to sneak into the supply closet of the Children's Department and borrow their die-cut machine to make perfect letters and shapes out of brightly coloured cardboard for these displays.

As systems specialist at a mid-sized mutual life insurance company in Waterloo, I was allowed to wear many hats. I taught myself a programming language and developed apps to solve my department's problems and turn processes that had once been riddled with human error into idiot-proof processes as the result of my having designed graphic user interfaces that made errors impossible. I was on fire and in heaven. This company's management had the same sort of vision as those at the top of Google who came up with 'genius hour,' and it paid off.

When I first entered the field of teaching English to refugees and immigrants, I was over the moon to get to bring so many of my gifts to the table. I used my love of the English language, my passion for all languages and linguistics, my artistic ability, and my aptitude for technology. My patience was appreciated, as was my compassionate heart. It's all in there. But more and more lately I am feeling called to lay this down a while in order to see what else I might have inside me.

My old friend Olivia once told me about a concept she called fallow time, which can be a very tough one for those of us who always need a project on the go. The idea is to stop doing and just BE for a while, just as farmers sometimes leave a field unplanted for a season in order to let the soil recover.

What I'm getting at is that I'm going to be letting this blog and my website rest in the very near future. In fact, there is just one more thing I've committed to doing that is standing between me and TESL blogger retirement, and that is to give you a review--probably on video--of a book sent to me by a publisher. They sent me two copies so that I can raffle off one copy to you all and keep the other. I'm looking forward to that; I am about halfway through the book.

How about you? Do you feel your gifts are being properly used by your employer? How does that feel?