Just in Time for Black History Month: an Abridged 'Life of Josiah Henson'

It's not as if I think Black history should be relegated to one twelfth of the year. Not at all. Black history is everyone's history and deserves a place in our classrooms at all times. Nevertheless, I know there are many teachers who will make a point in February of shining a spotlight on the topics of famous Black Canadians, the Underground Railroad, and other stories of the African diaspora that typically come to the forefront at this time of year.

In October of 2018, Irene Moore Davis spoke to my local TESL Ontario affiliate about incorporating local Black history in our lessons. She had a lot of great slides, and I was scribbling notes like crazy. But when I got back home and checked out all the links, I found mostly material that is suitable for K-12 classrooms full of native speakers of English and very little I consider to be suitable for the average CLB 3 or 4 LINC student. And that is when I had the insanely ambitious idea to create some myself. Boy, did I have a steep learning curve ahead of me.

When Irene graciously allowed me to pick her brain, I discovered she had written a chapter in the book A Fluid Frontier: Slavery, Resistance, and the Underground Railroad in the Detroit River Borderland. I checked a copy out of the library and read all of her chapter and much of the rest of the book. It is fascinating!

Then I found out that Irene was hard at work on her own book Our Own Two Hands, which has recently gone through the advanced readers phase, resulting in much additional content of value being contributed to her research, content that will be included in the published volume.

My dream of having an entire series of profiles ready for February of 2020 was a lofty one; I did not succeed. But I have finished an introductory profile which is meant to give learners an idea of what the freedom seekers were fleeing when they travelled here from bondage in the U.S.

N.B. Canada was not the blameless, angelic state we like to believe her to be: freedom-seeking took place in both directions across the Detroit River. If you don't know what I mean, read A Fluid Frontier and Irene's new book as soon as it's available. 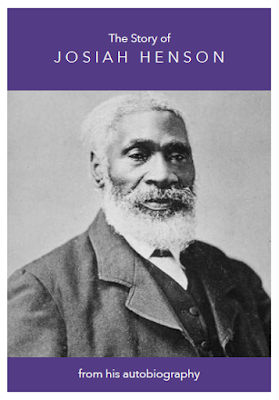 The introductory profile is that of Josiah Henson. I read his (now in the public domain) autobiography and managed to condense it to just 16 pages in a rather large font. I've inserted whatever public domain illustrations I could find in order to help our newcomer English learners visualize some of the concepts. I hope you will use the book and the suggested activities on the web page where it is hosted as well as the suggested extension ideas on the last page. I expect a high CLB 3 class to be able to handle it; certainly a CLB 4 class should have little difficulty if it is taken in chunks over a period of one or two weeks.

Bear with me as I continue to build this new page and add profiles.